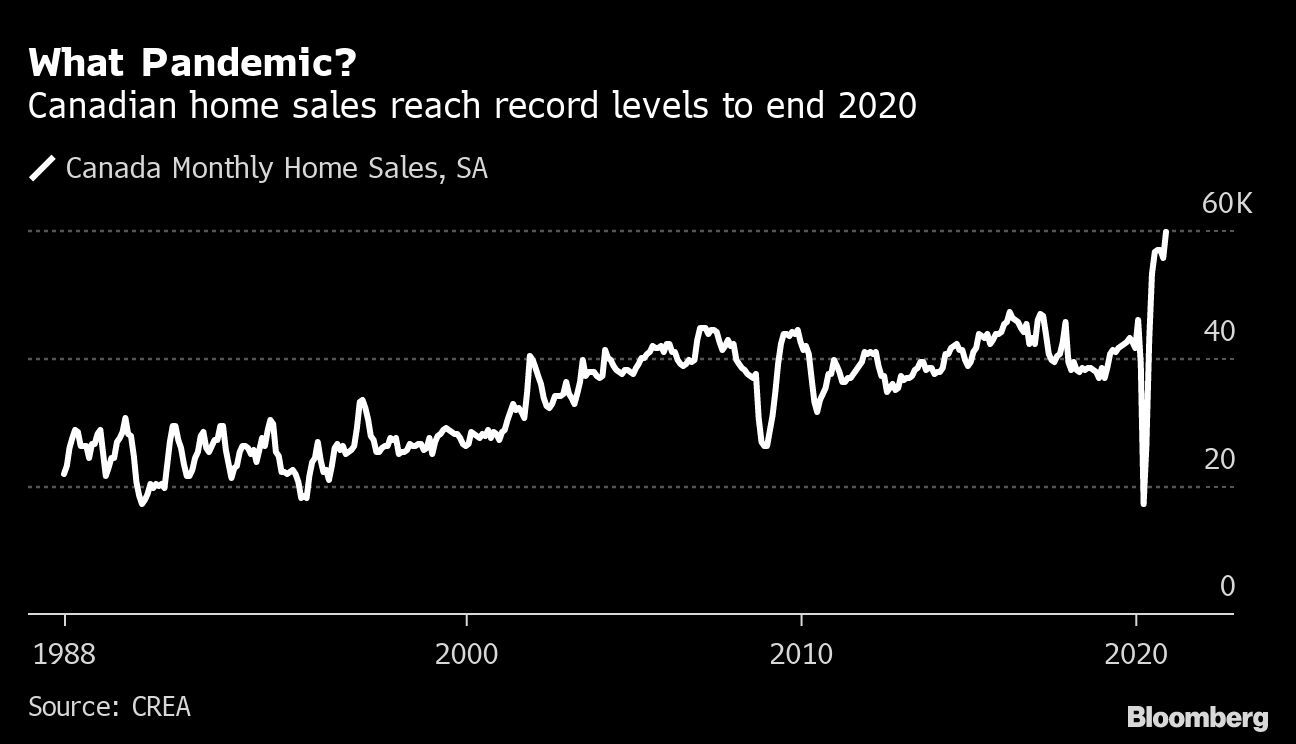 (Bloomberg) — Canada’s top central banker isn’t worried about the country’s hot housing market, saying low interest rates and demand for space rather than speculation are behind the price gains.

Accommodative monetary policy, a preference for more living area and the ability to work from home during the pandemic are the main reasons demand for single-family homes across the country has been so robust, Tiff Macklem said Wednesday in an interview with Bloomberg News.

“Because people are working from home, they don’t need to commute,” Macklem said via video-conference. “Many people feel that even after the pandemic there is going to be more flexibility in many workplaces to work from home than there was in the past.”

Canadian real estate boomed in 2020 even as Covid-19 laid waste to the economy and labor market. Unprecedented demand and the tightest-ever supply pushed national home prices to a record in December, with some of the largest increases happening in rural areas a couple of hours outside major centers.

It’s the sort of rally that often raises concern among central bankers, worried they may be stoking a bubble with low interest rates. At a decision on Wednesday, Canadian policy makers kept the overnight interest rate at 0.25% and reiterated a commitment to keep borrowing costs low until damage from the pandemic is fully repaired, something they don’t see happening until 2023.

Low financing costs will probably mean demand for single-family homes continues to outstrip supply in 2021, according to the Monetary Policy Report that accompanied the decision.

But the governor says he’s not worried about the country’s real estate market getting out of control, contrasting conditions now to 2017 when runaway prices in cities such as Toronto drew warnings about speculative bubbles and forced officials to take steps to cool things down.

“So far we are not seeing the kind of excessiveness in the housing market that would really get us worried,” Macklem said. “This doesn’t look like 2017.”

The most recent boom isn’t concentrated in higher-priced markets but is more broad-based across the country, the governor said. “That I think in itself is implying this is less driven by speculative activity and more driven by fundamental demand.”

The bank has been looking for evidence that prices are rising because people are betting on future gains, so-called extrapolative price expectations. So far, it hasn’t found any.

“We start to get worried when people buy houses for the sole reason of thinking the price will go up,” he said. “These are the kinds of things we are watching in a low-for-long world.”

Nor has the bank found any evidence that low rates are creating the kind of financial system vulnerabilities that would require it to change policy, though they are monitoring the situation closely.

“We are conscious that there are some risks here,” he said. “We are going to have to keep an eye on this and avoid a build up of vulnerabilities.”